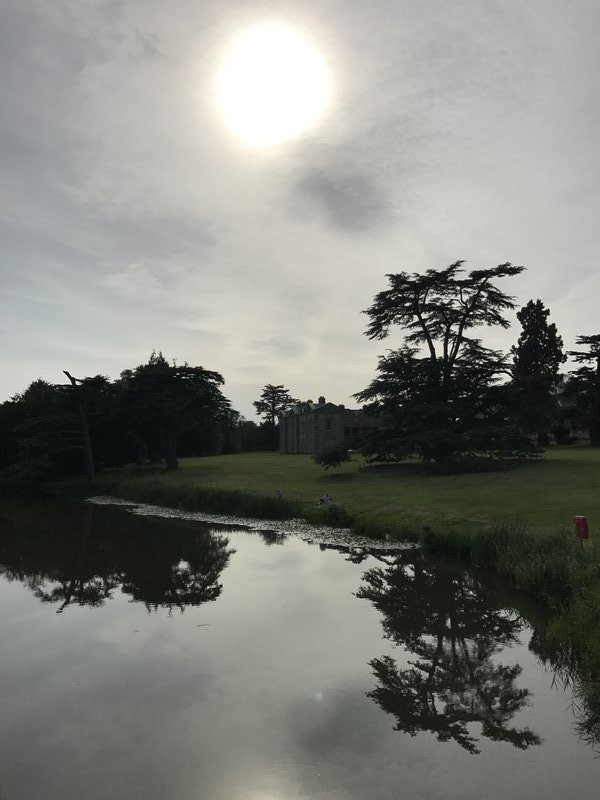 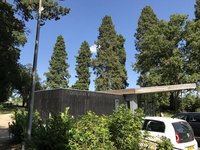 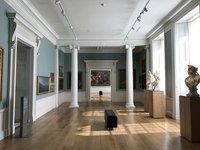 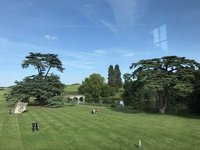 Compton Verney Art Gallery came into being thanks to the commendable charity efforts of Littlewoods sport betting fortune-holder the late Sir Peter Moores, Wikipedia tells me. It's a lovely old stately home that has been nicely restored complete with surrounding gardens and parkland that offer a bit of outdoor oxygenation time to mix in with the gallery visit. 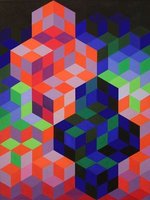 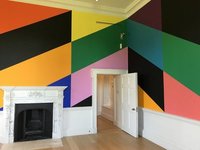 I got the idea to go this from a rave review (The Sunday Times, £) by an art critic whose verdict I trust. As I previously blogged, my favourite sort of art is generally modern, abstract and involving lots of interesting shapes, so naturally I really enjoyed this exhibition. It does a great job of demonstrating what optical art is and offers a pleasing evolution from black and white sketches through to riots of neon colour thanks to a well curated sequence. Among my favourites were the endearing optical inversion of M.C. Escher (top), the gorgeous coloured boxes of Victor Vasarely, (middle), and the colours on the wall of the gallery itself commissioned from German abstractionist Lothar Götz (bottom). Amusingly, once you have finished enjoying squinting at the paintings which in some cases offer additional colours or alternate visuals from different viewpoints, your eyes hurt. "How was the art gallery? Oh my eyes ache terribly, it was marvellous" :-) 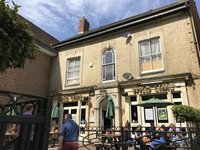 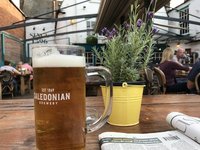 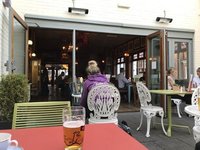 Banbury has a few choices for a pre- or post-painting tipple. The most central option is Wild Lime, (top), a chain pub that would probably be a bit grim if not for the nice garden out front. Much better is the garden at The Old Auctioneer, (middle), although the table service feels a bit pointless for a gastro-beer garden and it's quite slow. The Pinto Lounge, (bottom), is cheerier and you can get a pint much more quickly. All three only had a handful of craft beers between them so you do have to slum it a tad. Wild Lime has Ghost Ship on tap and not much else that doesn't have a listing on the stock exchange, while the Old Auctioneer has Caledonian Brewery's various mediocre beers and the Pinto Lounge has Lawless lager. 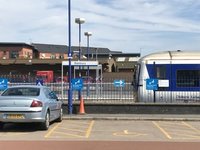 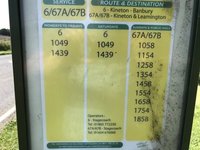 If you're looking for ideas for a quick trip to an art gallery, you're in the wrong place. Not that it's all that far away from London, but it requires a measure of committment from the average non-car using Londoner. The 1-hourish train from Marylebone to in Banbury is simple enough, they run every half hour or so, but then you have to add in a 1-hour bus ride that meanders through the oxfordshire/warwickshire countryside as if saying hello to every house between the train station and the gallery, which it pretty much does. Still, good value at £8 for a day ticket which you can buy on your phone or pay contactless on board. Where the bus falls down is on the timetable, (above) which looks like a stale yellow apple someone's taken a giant bite out of. Unless you happen to be there on a Sunday or Bank Holiday, a taxi back to Banbury from the gallery is a flat fare of £20 with 007 Cars Banbury.

Great show and great day out. They should build a railway to it tho :-)

Back when 'going emailing' was a thing and cold coffee wasn't

Got up late again, and ended up having expensive cheap breakfast in a swanky hotel right on Ban Jelačić Square out of laziness.

Had Boban's booked for 8pm, and went emailing to fill the weary hours between lunch and dinner, as rich people termed it.

What was so funny about the meal was that we ate more in a more renowned restaurant than the day before but cost us less - £8.50 each for four starters, five main courses, three desserts, four beers, two bottles of wine and eight coffees! My main course was the nicest pasta of all time - penne with smoked ham and cream and breandy sauce! French people at the next table were laughing at us because we ordered cold coffee by mistake.

We went upstairs to the cocktail lounge and had the strongest Irish coffees of all time, and then had a round in a jazz bar the book (Lonely Planet Europe on a Shoestring) told us was good but it was a bit dead, and they closed up, so we went to the Hard Rock Cafe nearby for one more and then relaxed in bed with really sleeping because of the coffee adn had to check out the next morning at 9am - doh!

On the tracks again! Had breakfast in what we called Dublin 7 because it was so far from Ban Jelačić Square, the centre of Zagreb. Got coffee and a tiny ham and cheese toasted sandwich for £2.60 and then lazed in a park until it was time to go to the station for our 13:20 to Budapest. Paul & Mary left us at the station as they were getting a night train to Venice. We were in a cabin (six-seater) by ourselves for most of it, and it was a smoking carriage - cool!

As we got off the train some guy gave us a leaflet for the Cozy Guest House but he seemed dodgy so we went to the Museum Hostel which was full so the owner there got us three beds in a hostel over the phone and then told us it was called the Cozy Guest House! It turned out to be ok after we stopped in a Chinese 'buffe' for a Chinese with a small can of beer £1.70! Went to a pub (for once not a cafe bar bistro or anything) for a few quiet pints and then left because Julie was sick or tired or something. Ollie had to sleep on the floor while me and Julie shared a double bed - the first time she had slept with a man since she left Dublin! 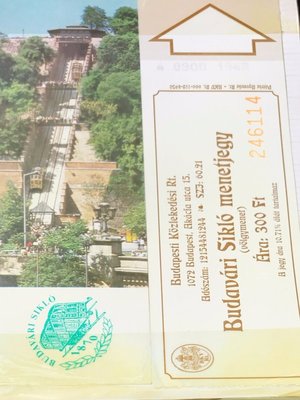 Arose about 12, determined to do a half-day's sightseeing. Wandered around the city in the rain, crossing a gigantic bridge over the Danube to Buda, the historical, cultural rea of the city. We took a cable car up the side of a mountain (technical term: funicular railway) to Buda Castle, which we didn't go into because of the queue but browsed the market stalls, where I bought a huge, real leather wallet for £11. Took a trip to the war museum, where our student card got us in for 24p and when we asked the old man in charge what was the best to see as we only had 20 minutes he gave us a free guided tour. Went down into the labyrinth where we had great fun runnign around in the dark with paraffin lamps, with cup of strawberry tea included in the admission price!

Went to a Chinese restaurant for dinner, where I had duck for the first time (gorgeous!), and fried ice cream (a golf ball-sized lump of ice cream in batter). Crossed the street to Cafe Mediterranean which had crap waiter service and so-so beer. It closed at 12 so we went back to the hostel but the NI guy took us back out to the Old Man's Pub, a sweaty cramped night club with sporadically good music. The barwoman served me Pall Mall cigarettes in error but I took them anyway as she opened the packet first. Got back around 5am.

Paul & Mary join us in living it up like rich people

Today started well - woke up feeeling great, and the dodgy shower, cornflakes and cofffee failed to dim my spirits. Paid the hotel concierge - whom we had seen working the previous morning, drink beside the reception all day, and then get back behind the desk that night. He even told us he was too drunk to work.

Got the 10:50 train to Dobova, a border town on the Slovenian side, and promptly relaised that the drunken motherfucker had forgotten to give me back my passport, held as a deposit, and I hadn't noticed. Waved goodbye ot Ollie & Julie as they boarded the 12:55 to Zagreb (our destination), as I strolled onto the same train I had just got out of, which was now the 13:00 to Ljubljana. It's now 13:20, and when I recover my passport I'll be boarding the 16:10 direct (at least) to Zagreb, arriving 5 hours and 18 minutes after Ollie & Julie at 18:55. Bollox.

On my way to Ljubjlana, I was propositioned by a Slovenian homosexual student, who would not shut up. He talked, leaning towards me with a big grin, and offered me free accommodation in Ljubljana! Scary. Arrived with Ollie & Julie having sorted accommodation, had cheap dinner in Trattoria Leonardos and then was hugely annouyed when Oille & Julie wanted to leave after one pint in the pub. 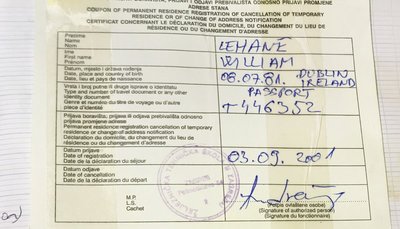 Woke up at 6:45 to see that Paul & Mary in the room - cool! We lounged for a while, and then wandered Zagreb for the morning, trying to kill time before going to the pub! We bought fruit at the fruit market and then had lunch outside in Trattoria Leonardos (again). Big slap-up lunch for about six quid. Lolled around and then had dinner in the restaurant beside Leonardos.

Went to a bar nearby, and when they tried to close at 12, Ollie went up and argued with the two barmen, and made a deal where we paid for our and their drinks in their dad's pub, where we were, and they would get free drinks from (for?) us in an Irish bar they wanted to go to. It was très bizarre, but great fun, giving Paul & Ollie pints with shots in them. It worked out really cheap, a fiver for six bottles of beer, and they gave us a lift to the bar in one of the guy's Lancia but the bar was closed so they dropped us to the petrol station near our hostel but it still took 1 hour and 20 minutes to walk home in the rain!

We didn't have to get up early so we didn't! After much lolling and debating over whether the 'minging' shower was even worth using, we ventured to the supermarket and got bread and bananas and crisps for brunch.

Because we got up so late, our first move was to geat ready to go out for dinner. After much traipsing around the city in the rain, we ended up in the restaurant Trattoria Leonardos again! The waiter recognised us and got us five Karlovačkos at his own suggestion.

After taking our time at the restaurant again we rolled into Caffe Bar Thalia, where we drank beers and drambuies and jagermeisters until twenty to 3:00, even though the last people before us left at 1:30 and it was supposed to shut at 1:00, all because it was worth the barman's while staying open for us five drinkers! He even only served me the last round because I pretended not to understand his Croatian ('keput' was fairly lucid!) and he couldn't be arsed explaining.

Before and after this point in our Zagreb sojourn, I noticed days and nights roll into each other, as all we did was play rich people, by just drinking coffee, eating lunch and dinner and drinking. It was a great laugh as a novelty, but I can't see myself living like that no matter how wealthy I got without going mental!