The colour of life 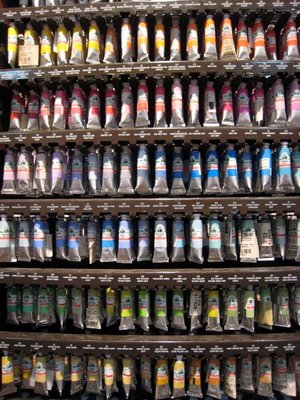 I may not know why I like art but I do know that I have always loved it. Something not a lot of people know about me is that before I wanted to be a writer, I wanted to be a painter. And I have wanted to be writer since I was eight, lost in the otherworldy dreamscapes of Roald Dahl's James and the Giant Peach, C.S. Lewis' Narnia and Mary Norton's The Borrowers, curled up in bed encircled by the red bricks and rowan trees of Rathfarnham dreaming of making imaginary worlds of my own. I dream of that still.

Before even then, I was an enormous fan of colour. Sometimes I think I liked blue before anything else on this Earth. My overriding sensory memory of my first years at school is the smell of school-supply paints and chalks. My earliest memory of all is of my mother taking me down the corridor of a grey and crappy but then stlll-new prefabricated building as a very small child of four or five to meet my teacher, the round-spectacled, white-bloused, blue Hillary Clinton-jacketed Mrs Donnelly. I don't remember if it was my first day of school or some other day, only the vibrant red of the floor and how it shimmered in the morning sun. A few years later, my parents were so proud of a oil painting I made when I was about 11 of a canal barge they bought a frame for it and hung it up on the wall, even though it was colour by numbers. It's still there, and I'm proud of it too.

In time, my interest in writing grew as my vocabulary swelled and I started to become known as the boy who was the best at English - a title I held on to all the way through to the end of school when I got the A1 grade everyone said was impossible to get because they gave it to no one - and I forgot about paintings, thinking I wasn't really that good at it anyways. When at secondary school and given the choice of Art, History or Music I went for Music and traded the paintbrush for a clarinet and that was it. Looking at the tubes of paint above I can't help but feel nostalgic, though it must be more than 20 years since I held one of them.

Still, you never lose an eye for art once you have it. Other people yawn through art galleries and delight in history museums, I yawn at museums and eagerly await the gallery. The first thing I look up about a city when I'm going or thinking of going there for holiday is - does it have a good modern art gallery? Every time. I once visited the medieval town of Albi in southwest France because it's the hometown of Henri Toulouse-Lautrec and has a nice little gallery devoted to him. What else is there? Aside from a train station, which I know because that's how I get there, I have literally no idea. It applies to daily life to: I have lunch in the Barbican almost every day now just so I have an hour to feel cultural amidst the City hubbub

Travel for everyone is about sights, but which kind of sights varies more than you might think. I saw a listing for an animal theme park in Tenerife the other day and was little short of revulsed. And it's #1 on Tripadvisor. My kind of travel is to go to a place, learn about the people there and their culture and try to experience a little of the life they live. You can do a lot of this through art because it gives you a view of what inspires them, what they like to look at and what they choose to immortalize in pigment. Picasso will give you visions of Spain (along with his adopted Paris of course), and Canaletto's paintings are more Venice than Venice itself. And while his brother William Butler vies for attention in the crowded Irish canon of poets, authors and playwrights, Jack Butler Yeats stands alone in his many paintings chronicling Irish life.

Plus when you travel you can see a hell of a lot of nice art. The Chagall stained-glass windows of the Fraumünster are one of Zurich's finest assets, to name one of many I've seen all around Europe and further afield at this stage. I'm glad I queued for two hours in the August sun to get into the Uffizi in Florence and see its many artistic delights at the age of 21, because if i tried to do that again I would probably faint from heatstroke. Aside from the many amazing Japanese things I saw on my first trip to Tokyo in 2006, obviously, another memory that sticks out strongly is going to Africa Remix at the Mori Art Museum in Tokyo. A truly fabulous collection of art from all over Africa, I had no idea until afterwards it had already been on show in London, Paris and Hamburg before I travelled from Dublin half way round the world to see it and love it in Asia. Of course some paintings are so powerful they transcend location. After all Van Gogh's Cafe Terrace at Night is for many the timeless epitomy of the Paris cafe scene even though you have to go to a gallery in Otterlo, Netherlands to see it and it actually depicts a cafe in Arles. 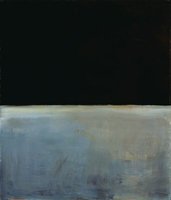 Art is different for everyone, and as much as people may love portraits of 17th century royals of various hues, I think they're vacuous and vanishingly dull. The National Portrait Gallery, sitting proudly in the centre of Trafalgar Square, is London's least interesting art gallery by my reckoning, especially while the city boasts a regular program of visiting exhibitions at galleries all over town to rival any other city in the world. Give me Mark Rothko's visionary monochrome of the Moon that recently landed in the Royal Academy or Kazemir Malevich's many Suprematist masterpieces that lit up the Tate Modern last year any day.

As much as the temptation may be to list out your favourites, the best painting for me, I'm sure, will always be the next one. I'm really looking forward to seeing Revolution: Russian Art 1917-1932 at the RA, and am currently waiting like a sleeper cell of art fandom for a quiet Tuesday some weeks after the opening to see it and have the room all but to myself. Ditto America After the Fall: Painting in the 1930s. And so on. How lucky I am to live in London and have the luxury of waiting for the right moment. After all that's art itself, life at the right moment. Grab it while you still can.

Previous Next Table of contents

Comments on this blog entry are now closed to non-Travellerspoint members. You can still leave a comment if you are a member of Travellerspoint.

If you aren't a member of Travellerspoint yet, you can join for free.