After sleeping on a mattress in Élise’s place, we got to Paris Austerlitz train station by 10am and got on the 10h11 train to Limoges. Our intention had been to go to Périgueux via Limoges, and then to Barcelona via Bordeaux the next day, but the complications of five trains with huge gaps in one long day meant that we abandoned going to Périgueux. We got to the train station at Limoges intending to get a night train to Barcelona, but it was booked out so we reserved seats on tomorrow’s first train (9.50) which gets to Barcelona at 6 in the evening.

Got a surprisingly nice room in the one-star Beaux d’Art hotel for 80f each (£10), with a TV!! MCM, a better version of MTV with all English songs, keeps us entertained. An hour-and-a-half special of Glastonbury 2000 was the backdrop to tasty Kronenbourg 25cl cans, and cheap vinegar (sorry, wine) that Ollie and Julie had. We also came across ‘Blues Brothers 2000’ dubbed into French, and ‘Le Maillon Faible’ – the French’ Weakest Link’.

My abiding view of Limoges was that it’s just a town that people pass through, half-way between Paris and Toulouse, with parts of it reminding me of Naas and Cashel. It was obviously built on a mountain, as several hill climbs in search for accommodation proved.

Had a strong ‘grand crème’ (coffee with cream) in Limoges train station before getting on the 3603 9.50 train to Barça. After 20f each to reserve seats, we ended up in unreserved seats because we couldn’t find carriage 15, which was not between 16 and 14.

Met a French physics student while smoking between carriages (a sign on the wall says ‘Merci de non pas fumer’ with an arrow pointing down to the ashtray fixed to the wall underneath! The power of French people’s blind-eye attitude to smoking in trains, stations and many other places is quite incredible, and much more liberal, unexpectedly, than in Ireland). Amusing myself on the train with Tim’s book ‘One Hundred Years of Solitude’, which is blackly comic, my favourite kind of humour!

…Just had a cigarette at my inter-carriage spot admiring the golden countryside between Carcasonne and Narbonne, within 100 miles of the Spanish border. I had been listening to a variety of French stations on my radio, including everything from a jazz piece called ‘Marmalade Saxaphone’ to the Bangles ‘Manic Monday’!

…In Barça! Las Ramblas is like a hot, dirty O’Connell Street – we’re staying in the 1* Hotel Real on the Place du Real – they gave us a 5-bed room! 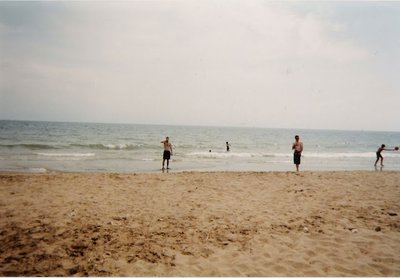 Got a bus from Barcelona city centre to a campsite 9km outside it, deciding to atone for our one-star indulgence. 1km walk through a nature reserve in 30˚ heat with backpacks to the site was a test of manhood!

The site was like a holiday camp for working class Spaniards – beach, pool, bar, restaurant – some even slept in caravans with satellite TV! Lolled around after setting up our tiny 2-man tent. Swam in the beach – nice, but sand got everywhere!

Dinner in the restaurant was crap and our skirmish with 3 plastic garden chairs from the bar to tent seemed successful until the barman came and confiscated them! Sat on our sleeping bag covers on the ground drinking 6-packs of San Miguel bottles (£2 each!)

Two seeming lesbians were in one of the tents opposite – they were so precious they had milk and cookies before bed! The tent beside us held an Italian couple who seemed to hate each other – Ollie dubbed their camping trip ‘the last ditch attempt to save their marriage’! Offered drugs by hippies in another tent.

Night’s “sleep” was interrupted, scorching, cramped and painful – woke up with a multiple-paining (now a word!) back, sore head and dehydrated system. My first impressions of camping are that it’s fun, but we were severely under prepared and unequipped. To think Tim has ‘scouted’ for almost a decade and this is my first night in a tent!

Left the campsite at midday, getting a bus to Barcelona city centre. Sent e-mails from a nearby net café (£1 for 44 mins), strolled half-way down Las Ramblas and then stopped for coffee at Café Cosmos courtesy of my Dad.

Strolled through the souvenir stalls finding nothing I liked, and then flopped down at a green at the street’s end, staing at the tall Christopher Columbus statue, that must have looked like Nelson’s Pillar in Dublin

Went down to Barcelona’s new wave-shaped pier – not as good as it sounds, but it has a very Americanised mall at the end, in which I bought a German frankfurter (globalisation?!)

Took the night train from Barcelona to Nice after a train to Cerbere on the French border (we had to go there first). The night was hellish – 6-seater cabin with a perverted Frenchman, a deaf mute and his half-deaf, half-dumb wife and their two-year-old boy – I felt like taking the poor child off the train with me as I took a smoke break at 2am out in the corridor, having had enough of the bitch mother slapping the boy for wheezing almost noiselessly. She made more noise than the child, and I wanted to hit her back for the kid, disabled woman or not. Had G and Ts out of plastic cups after everybody got out at Marseille. Weird!*

*I haven't mentioned it here, but the sight of Ollie deliriously shooing these awful people out of their seats at dawn before giving the woman a shove out of the carriage and slamming the door behind her was one of the funniest things I have ever seen! 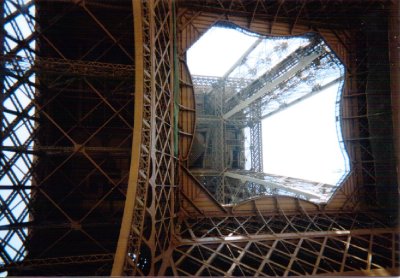 What follows is the travel journal I wrote during an Inter-railing trip around Europe I took with my friends Ollie and Julie back in 2001. Every detail whether insightful, embarrassing, naive or otherwise has been left in to add to the fun! Some notes will refer to receipts and other little things I attached to the physical copy, and watch out for references to about a dozen currencies that no longer exist :-) Bill, 2012. 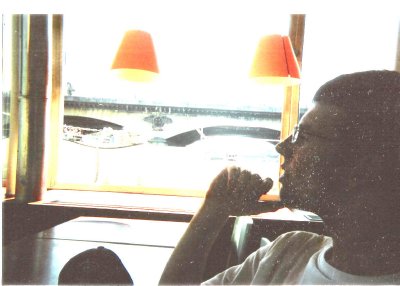 By chance, Ollie got the same Aircoach as me. The flight seemed quick, with the lack of any U2-style airport terminals in the part of Charles De Gaulles that we passed through being the only disappointment, and a momentary hitch of almost leaving the airport without or bags was quickly followed by a near miss with some scalper taxi man offering us a ride to the city centre; just got a shuttle bus to the train station and then walked from Gare du Nord to Woodstock Hostel, which was booked out so we stayed in the quite reasonable one-star hotel opposite*.

Wandered the streets later on drinking Stella Artois and Kronenbourg ‘demis’ (500ml), which cost a pricey £3-plus in L’Ecran, Le Commerce and Bar de l’Atelier. Sat on windowsill in hotel smoking and listening to ‘Radio Classique’ before bed.

P.S. On our walk around, we stumbled upon the hugely impressive Sacre Coeur, a massive church on the top of a hill, the highest point in Paris. Three French guys sang ‘You’ve lost that lovin’ feeling’ to the hippie kids sitting on the steps below staring at the Paris skyline. 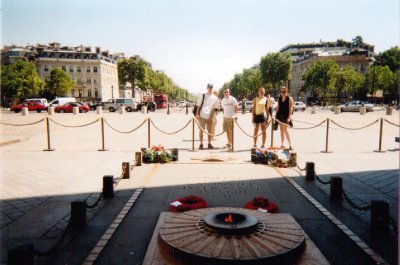 Myself and Ollie at the Tomb of the Unknown Soldier 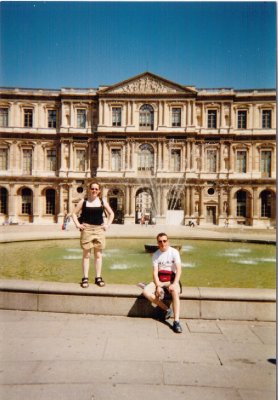 Julie and Ollie outside the Louvre

Ordered black coffee by accident with our free breakfast, which consisted of a baguette and apricot jam but it turned out to be gorgeous.

Went on a mad sight-seeing binge, taking advantage of Paris’s amazing metro system and our appetite for long walks in the sun, seeing Notre Dame (the flying buttresses reminded me of Junior Cert history!), Palais de Justice, Musee d’Orsay, l’Arc de Triomphe (with the flame for the unknown soldier), the Louvre (closed, but the building outside was the most impressive thing anyway) and the Eiffel Tower, which we were too knackered to climb.

Had lunch on a boat on the Seine overlooking the Tour d’Eiffel. Complications with Julie’s friend meant a second night in the hotel split into two rooms this time. Drank cheap Kronenbourg and Konigsbacker out of the bidet in the room! 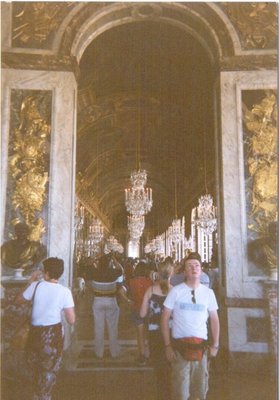 Ollie admires the Hall of Mirrors

Devoted the entire day to Versailles – a slight mishap getting the wrong metro was an annoying but not too costly mistake (61f or 75-ishp for 10 journeys, and if you switch metros without leaving the station you only need one ticket!)

A 90-minute queue in the sun was worth it to see the amazing Hall of Mirrors where Louis XIV hosted festivities and where the treaty ending World War I was signed. Saw Louis XVI’s bed chamber – Marie Antoinette’s looked more comfortable! The sheer amount of gold and expensive paintings was amazing. Only had time to gander at the gardens, which are more gigantic than we thought.

After getting to Julie’s friend Elise’s granny’s apartment in Montmartre (‘bohemian quarter’, as she put it) we ventured to the African ghetto of Barbes, where after manky streets and drug dealers on every corner we reached ‘A la Goute d’Or’ where we had a tasty meal followed by the break in the heat wave of the last week that left us dashing inside the restaurant and watching the lashing rain for an hour. The waitress even gave us free hot milk tea to warm up! 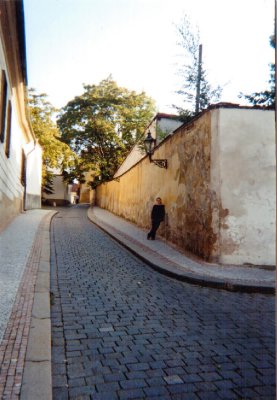 Julie finds a picturesque place for a photo

On the go images from the protest

Update: Here's what the cathedral looks like now that the protestors have been forced to leave. 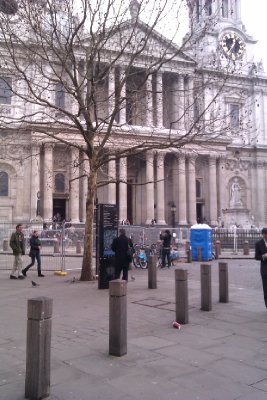 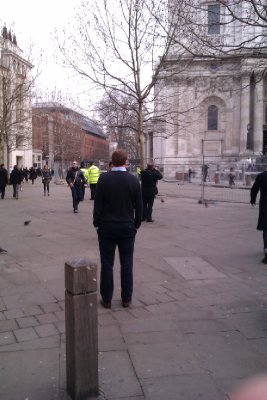 I snapped a few early morning photos of Day 5 of the Occupy London protest outside St Paul's Cathedral. 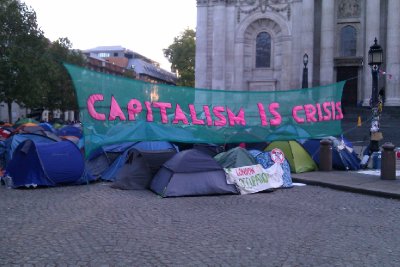 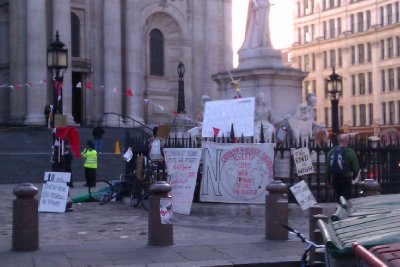 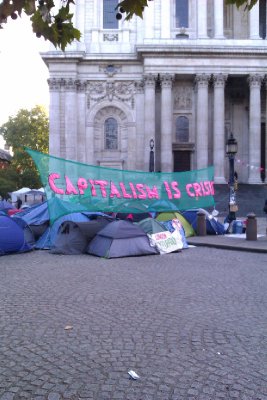 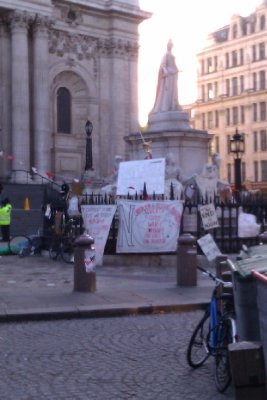