Two kinds of Indian in one day

'An Eagle Ceremony At Tesuque Pueblo' by Gustav Baumann, 1932

A few days before Christmas my friend Paul, a videojournalist from Dublin, commented that if I had been told a year ago that in 12 months' time I would be married and living in America, I would have laughed.

And so it was, very enjoyably so indeed. Myself, Megan and my mother-in-law Patricia glided up a near-empty Interstate 25 past the snow-dusted Sandias from Albuquerque to Santa Fe. By the time we got there, notwithstanding our final destination of a feast, we were already in need of some lunch.

As our server noted on our way out, it was the only restaurant aside from fast food and Starbucks that was open in Santa Fe on Christmas Day. The funny part was that it was an Indian restaurant - as in New Delhi, Calcutta and Mother Teresa. While the buffet lunch was delicious, the stop was especially worth it for the even more delicious double entendre!

Suitably stuffed, we trailed down the 285 past some spectacular snowy scenes to Tesuque Pueblo. We first met some very helpful Tribal Police who guided us to our hosts. There we found an adobe dwelling that was just like any other American home on the inside.

We were treated to some tasty posole and other local treats too spicy for this writer, as well as some more familiar turkey. Five minutes later, and we were joined by the same two policemen, who sat down to eat and were quite fascinated to be in the company of an Irishman! We traded questions about international and Native American cultures in a very friendly and equitable exchange - what could be more in the spirit of Christmas! 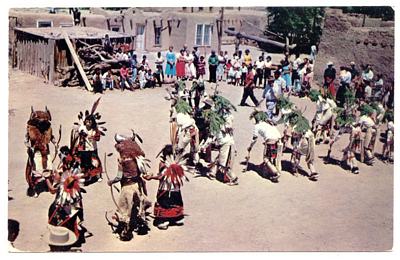 The dance we saw was the Deer Dance - as represented by the figures on the right of this old postcard (credit). While it was brief, we were quiet glad to get in out of the sub-zero temperatures. The only drawback of the day was not being able to visit the church within the square of the pueblo - innocently, it was just closing, but perhaps it was not a great omen for Christmas Day!

Our trip was bookended by two more conventional celebrations that combined with Christmas Day to create a very enjoyable holiday season - drinks in at our new place on Christmas Eve with our friend William, and food with family for what I still know as St Stephen's Day at Megan's aunt Jane's house.

So until we meet again in the new decade, dear readers, consider that the Christmas spirit can be found and enjoyed in the most unexpected of places. Happy New Year from New Mexico!

A Home At The End Of The Madness 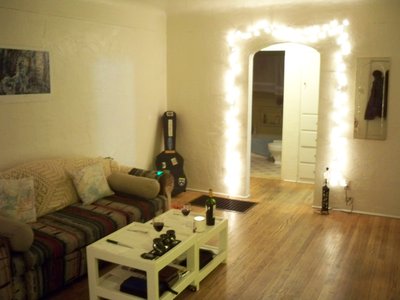 Hi folks. Well, it has been a long time since my last entry. Which is surprising since during this hiatus, I have been working less than I have at any time since July 1999. I figure this since I have been either in full-time education or full-time employment - often 1.5 of these - for pretty much all of the last decade.

Nonetheless I have not been idle: a small and - believe me - painstakingly generated string of offshore freelance writing and copy editing jobs; house cleaning, housesitting and petsitting; gathering paperwork for a Green Card; as well as expanding my website have all kept me busy over the past few months. Add to that the fact that myself and Megan have moved four times since September, and have lived out or half-out of a suitcase for most of that time, the amazing generosity of Megan's relatives notwithstanding.

To my great delight, the trunking has come to an end with the beautiful new pad (pictured above) we've got ourselves in the student district of Albuquerque, New Mexico. We chose it because it's more classic bungalow than modern stack apartment - the perfect home for two writers, in other words. Moreover, we have significantly more space than we did in Dublin - the fridge is comfortably four times larger, for example - and we have significantly more ways to use our space than we did in China. There it was a case of 'this room is unbearably hot and has no aircon', 'that room has a live bat circling in it', you get the idea.

We've already had the chance to celebrate with a small but hearty Housewarming, and have especially benefited from the good nature of friends, relatives and Freecycle to fill what is, unusually for me at least, an unfurnished home. Now we can be snug for the snowy winter and continue to have fun with the considerable range of things there are to be enjoyed around Albuquerque, except now largely on foot or via surprisingly cheap public transport.

Before you go, dear readers, have a peaceful and happy holiday season. And do check out the sister blog post to this one, 'A Home At The End Of The Randomers', in which I documented the diverse range of lodgings I held around Dublin town during the bulk of the noughties. At this end, I'm thinking that the warm glow of a happy new home is one of life's great feelings :-)

66 reasons the US is better than China

Why Silly Billy's happy with his new home

Well, hello there! In honour of Silly Billy's recent relocation from China to the United States, I thought I'd make this run-down of why life is so very much easier around here. In no particular order - apart from number one, which is number one - here are my 66 reasons why it's better to live on Route 66 than Liyang Jie.

1. Decent brewed coffee is widely and deliciously available.
2. Chairs and tables are designed for people of average Western height and size.
3. The range of edible fast food extends beyond McDonalds.
4. The range of inedible fast food extends beyond KFC.
5. When you want something midway through a meal out, the server will probably come over unheeded and ask if everything's all right. (In China, you have to crane your neck in every direction before screaming 'Foo-yennnnn!' at the top of your voice.)
6. Splashing water on your face does not require bending the knees
7. The toilets don't look like this: 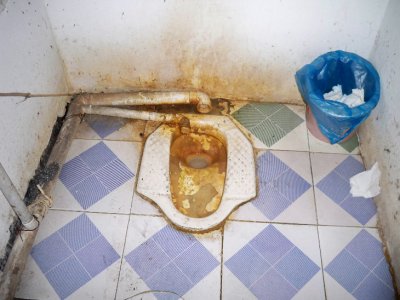 8. Using a public computer does not necessitate getting pernicious adware.
9. YouTube, Twitter, Facebook and Blogger are accessible at any time.
10. Cinemas show movies in English.
11. Taxis have seatbelts.
12. Supermarkets don't sell live birds.
13. Opening the kitchen window will not result in a new pet bat.
14. Apartment complexes have lifts.
15. Nobody says 'at last' when they mean 'in the end'.
16. Rubbish bins don't look like this: 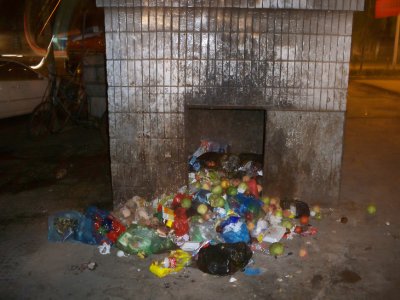 17. Coffee at the airport does not cost $12.88
18. Buying takeaway meatball soup does not result in convulsive vomiting.
19. Convulsive vomiting over a sink does not result in a broken rib.
20. Showering is in a stall or bathtub, not over the floor
21. The internet works during the midday heat.
22. There are no bars without beer on tap.
23. Babies do their business in nappies, not on the street.
24. Cooking herbs don't come via international mail.
25. Headache tablets don't come via international mail.
26. DVDs don't come with Mandarin subtitles burnt on, and usually feature accessible menus.
27. Drinkable wine is widely and deliciously available.
28. Cheese is less than a 90-minute train ride away.
29. Popcorn doesn't have sugar.
30. Fruit salad doesn't have mayonnaise.
31. Pasta doesn't have ketchup, and is served warm.
32. You can buy things online with a foreign credit card.
33. You can buy a cup of coffee with a credit card.
34. Overheard music sometimes sounds good.
35. Ham is savoury, not sweet.
36. Nobody drinks red wine with ice.
37. Sofas are comfortable.
38. Buses don't make your insides rattle.
39. Toilets have toilet paper.
40. Most streets can be walked in sandals.
41. Haircuts don't come with painful knuckle 'massages'
42. Crisps generally don't have added mint flavour.
43. Christmas is widely celebrated.
44. Visiting an internet café does not require a passport.
45. A man of average height can walk through doorways unimpeded: 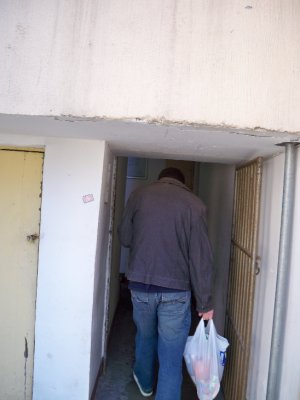 46. Gizzards are discarded.
47. Lunch is generally served later than 11:05am.
48. Local currency can be exchanged overseas.
49. Irregular bowel movements are just that - irregular.
50. Television's worth watching, at least some of the time.
51. English-language bookstores are not a phenomenon exclusive to megalopolises.
52. Westlife aren't popular.
53. Red meat never smells like dirt.
54. You never see anyone take a dump.
55. The number of rooms in your house does not depend on the season.
56. Notice is usually given before professional or social appointments.
57. Chances are somebody else will have already devised an English-language map for your town and you won't have to make one yourself.
58. Personal bags can come to the supermarket.
59. Lighters can come on the plane in your luggage.
60. No matter how incomprehensible you are, ordering a beer will never result in lime Bacardi Breezer.
61. Video games, for those that play them, are more thrilling than your average taxi ride.
62. Milk is less than a taxi ride away.
63. The dimmest child won't think New York is in Africa.
64. Limes exist.
65. Water can be ingested safely.
66. Pigs don't fly: 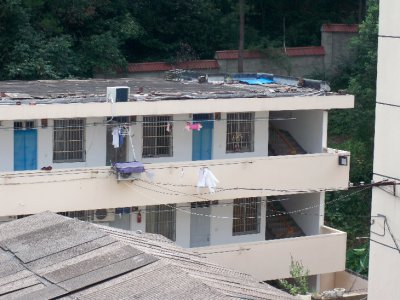 There are plenty more reasons I could add to this strange list I'm sure, although stranger still was the slight feeling of nostalgia I had while writing it. Until next time, dear readers, suffice to say life is complicated in China. :-)